Bayesian optimization (BO) is among the most effective and widely-used blackbox optimization methods. BO proposes solutions according to an explore-exploit trade-off criterion encoded in an acquisition function, many of which are derived from the posterior predictive of a probabilistic surrogate model. Prevalent among these is the expected improvement (EI). Naturally, the need to ensure analytical tractability in the model poses limitations that can ultimately hinder the efficiency and applicability of BO. In this paper, we cast the computation of EI as a binary classification problem, building on the well-known link between class probability estimation (CPE) and density-ratio estimation (DRE), and the lesser-known link between density-ratios and EI. By circumventing the tractability constraints imposed on the model, this reformulation provides several natural advantages, not least in scalability, increased flexibility, and greater representational capacity.

Bayesian Optimization (BO) by Density-Ratio Estimation (DRE), or BORE, is a simple, yet effective framework for the optimization of blackbox functions. BORE is built upon the correspondence between expected improvement (EI)—arguably the predominant acquisition functions used in BO—and the density-ratio between two unknown distributions.

One of the far-reaching consequences of this correspondence is that we can reduce the computation of EI to a probabilistic classification problem—a problem we are well-equipped to tackle, as evidenced by the broad range of streamlined, easy-to-use and, perhaps most importantly, battle-tested tools and frameworks available at our disposal for applying a variety of approaches. Notable among these are Keras / TensorFlow and PyTorch Lightning / PyTorch for Deep Learning, XGBoost for Gradient Tree Boosting, not to mention scikit-learn for just about everything else. The BORE framework lets us take direct advantage of these tools.

We provide an simple example with Keras to give you a taste of how BORE can be implemented using a feed-forward neural network (NN) classifier. A useful class that the bore package provides is MaximizableSequential, a subclass of Sequential from Keras that inherits all of its existing functionalities, and provides just one additional method. We can build and compile a feed-forward NN classifier as usual:

See First contact with Keras from the Keras documentation if this seems unfamiliar to you.

The additional method provided is argmax, which returns the maximizer of the network, i.e. the input $\mathbf{x}$ that maximizes the final output of the network:

Since the network is differentiable end-to-end wrt to input $\mathbf{x}$, this method can be implemented efficiently using a multi-started quasi-Newton hill-climber such as L-BFGS. We will see the pivotal role this method plays in the next section.

Using this classifier, the BO loop in BORE looks as follows:

Let’s break this down a bit:

Here is a step-by-step animation of six iterations of this loop in action, using the Forrester synthetic function as an example. The noise-free function is shown as the solid gray curve in the main pane. This procedure is warm-started with four random initial designs.

The instances below this horizontal line are assigned binary label $z=1$, while those above are assigned $z=0$. This is visualized in the bottom pane, alongside the probabilistic classifier $\pi_{\boldsymbol{\theta}}(\mathbf{x})$ represented by the solid gray curve, which is trained to discriminate between these instances.

Finally, the maximizer of the classifier is represented by the vertical solid green line. This is the location at which the BO procedure suggests be evaluated next.

We see that the procedure converges toward to global minimum of the blackbox function after half a dozen iterations.

To understand how and why this works in more detail, please read our paper! If you only have 15 minutes to spare, please watch the video recording of our talk! 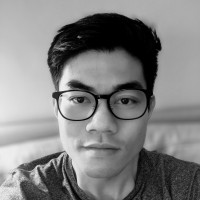 Thanks for stopping by! Let’s connect – drop me a message or follow me: